Another View of the World as Seen by Robert N. Clinton

Robert N. Clinton, aka CyberShutterbug, is a retired law professor/judge and a long-time amateur photographer based in Phoenix, Arizona. He primarily shoots street photography as well as landscape and cityscape images. Clinton shoots both digital and film images. His tools include digital cameras from full frame DSLRs to small mirrorless cameras as well as film cameras, including Olympus, Canon and Nikon SLRs; Canon and Voightlander rangefinders; medium format Yashica and Bronica cameras; and various 35mm compact point and shoot cameras. 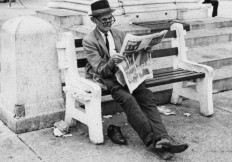 Clinton began his photography career when he was in junior high school in the 1960s. His seventh grade teacher, Mr. Kepler, taught a class about optics and light, including the camera obscura and the pinhole camera. As an assignment, he decided to make a pinhole camera out of a coffee can. His dad, Fred R. Clinton, of blessed memory, was an amateur photographer who had just built a darkroom in the basement of their home. He suggested that they could develop and print the film from the pinhole camera. When his dad took Clinton into the darkroom and showed him the image from the handmade pinhole camera emerging under a red safelight in the developing tray, Clinton was hooked. In high school, Clinton read everything he could about photography, becoming a major devotee of the famous photojournalist/street photographer Henri Cartier-Bresson, master landscape photographer Ansel Adams, and varied works of Edward Weston. He became the photographer for the high school newspaper, shooting football and basketball games, first on a twin lens reflex and later on his dad’s then new 35mm SLR. He took to walking the streets of his hometown of Detroit in his spare time, shooting street photography in the 1960s before such photography commonly bore that label. He also developed his darkroom skills, developing and printing his own pictures in his father’s darkroom. In short, Clinton owes his love of photography and whatever skills developed over the years to the love, patient support, resources, and instruction provided by his late father.

As his legal career and family blossomed, Clinton found he had less and less spare time to devote to photography, but kept shooting, as do most amateur photographers, mostly taking pictures of family or of landscapes while on vacation. Many of those shots were made with 35mm point and shoot compact cameras, such as the Olympus XA2 and various Olympus Stylus Zooms. Finally, in the early 1990s Clinton found himself with both the time and resources to return to more serious photography, purchasing for the first time his own 35mm film SLR, a Nikon N6006.

As an avid computer geek who also taught Cyberspace Law, Clinton immediately switched over to digital photography in 2000 when Olympus released one of the first digital DSLRs, the 2.5 megapixel Olympus Camedia C-2500L. As his digital cameras matured and Clinton became more proficient with Lightroom and other post-processing techniques, he slowly moved into HDR photography. As that work progressed, he belatedly realized that even at its best, digital photography lacked the dynamic range, and in some cases the resolution, of film. Accordingly, he returned to his long neglected Nikon N6006 and acquired a raft of other used 35mm and medium format film cameras and increasingly shoots more film than digital images. Nevertheless, he employs a hybrid process, scanning his negatives for publication on this site and cross-posting to Tumblr and Flickr. Whether shot on film or digital, Clinton now processes his images for print or publication on the computer, rather than in the darkroom. Just for the nostalgia and fun of it, he also recently has dabbled in 120 medium format film photography with three used Bronicas, a Yashica TLR and a Holga.

Unless otherwise stated, all photos on this site are subject to copyright and owned by Robert N. Clinton aka CyberShutterbug. Do not remove attribution or add extraneous links. All rights are reserved. Please credit the photographer if you reblog or otherwise reuse.